For Ben Gross, explaining automation is a simple proposition.

“The core of automation is machines doing work,” Gross, one of the contract manufacturers at Prairie Electric in Vancouver, WA, said. “Where automation is helpful is in repetitive actions where repeatable results are highly desirable. You want to be able to do something 10,000 times in a row.”

Automated machines bring speed, reliability, and precision to the manufacturing process. Where Ford perfected the assembly line, today’s automated machines improve on that a thousand times over. Instead of a tool belt, it can be as simple as a push of a button.

“We recently added a CNC (computer numerically controlled) router to help us with cutting holes,” Gross said. “We used to get a tape measure, square, pencil, and make a bunch of marks. Then we would make the holes by hand.”

But a machine is only as good as its operator. Or, more precisely, it’s software.

“When it comes to the software, it’s ‘Garbage in, garbage out,’” Gross said. ”But if you put in the right information, automation is very dependable and very repeatable. If it’s set up correctly, it’s more reliable, the holes are going to be much rounder, and in the right place.”

At Prairie Electric, automation is used more for the precision and the time it saves. As a builder of automation panels, though, they have no need to mass-produce any one product. Every machine their crews build a panel for needs a custom touch. 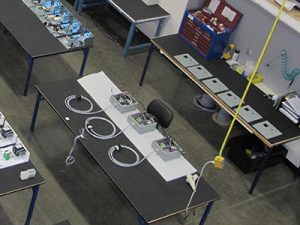 “With our UL 508 panel shop, almost everything is very different,” Gross said. “Building the control panels doesn’t lend itself to automation. We’re not building the same widget 10,000 times. We might do two of one kind, then we might have to do something different.”

The team also employs automated testing machines that were designed and built in house. These machines are used to test the boxes they built, not only saving time over manual testing but improving accuracy as well.

Previously, two technicians may perform 100 test steps on a single box for 20 minutes with an accuracy rate of 97%. Sounds good, right? With the automated test machines, one technician can now test the same box in five minutes while performing 200 test steps. And all of that information is automatically stored electronically. The speed, accuracy, and reliability of these machines have helped the company compete in the global market.

Creating the panels that guide automation

While automation plays a part in the shop, the team concentrates on the other side of the coin: building the panels that make it possible. No matter if a client has a simple idea or full-blown schematics, they’re able to give them the control panel, software, and training their clients need to become automated.

“There’s a really a broad spectrum of how we interact with our customers,” Gross said. “On one side, we have customers come in with a sketch on the back of a cocktail napkin. We help them sketch out different aspects they need and we will help them design the machine, the controls, and all of the programming. Other clients will do all of the design work and we just build it.”

Automation provides industries with fast, dependable work to better make their products. But it’s the panel and software combination that allows those machines to make precision movements each and every time.

“It saves us all kinds of time,” Gross said, “And I would say it’s more dependable.”

Automation has made the, producing materials, products, and machinery at a faster rate than ever before.

From Ford’s first assembly lines to today, automation has made the manufacturing industry more efficient and consistent. With well-engineered control panels powered by advanced software and coding, it all starts with the push of a button.