With the advent of “smart” appliances, massive entertainment systems that require the internet, and other technological advances, residential homes have a wide range of wiring hidden behind the walls. But for most homes built in the last 60 years, the bulk of the wiring has been consistent: one live/hot, one neutral, and one ground/earth wire. 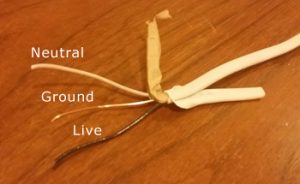 In order for the house to have power, several circuits need to be completed. If you know where your electrical panel is, take a look at how many circuit breakers there are. Each breaker represents a part of your home that is receiving power, such as a master bedroom, family room, kitchen, and anywhere else that is getting electricity.

Essentially, a circuit is a loop that starts by sending electricity out to all of the outlets, light switches, and other fixtures for a given room. However, to complete the circuit, the flow of power needs to be brought back to the breaker. If the flow is interrupted, the entire circuit is shut down.

The live wire sends the power out and the neutral wire brings it back. The ground wire is in place as a safety measure meant to absorb and any surges along the line. In most cases, the live wire is covered in black sheathing, the neutral in white sheathing, and the ground is left bare or has a green sheathing.

All three wires are the same material, but the different colors help to differentiate between the three down the line. Imagine trying to keep the wires straight through a junction box, four or five outlets, and a light fixture/switch! All three wires are all encased in another sheathing that acts as protection and keeps the wires together.

That’s important as the wire is run throughout the home, along joists, through wall studs, and in and out of junction boxes. If you’ve ever seen a remodel or new build taking place, you’ll see just how much wiring is involved to make sure you can microwave popcorn on movie night.

While you could run one circuit throughout the entire house, that would be entirely too much load for one breaker. That’s why there are so many breakers in the panel, each designed for a particular part of the house. A dedicated dryer line will use a 30 AMP breaker while a circuit to the den may be 20.

Wires also come in different sizes (gauges) and it’s important that the appropriate wires are used in the correct breakers. If not, the breaker will continually shut off or may even cause damage to the panel itself. In most cases, however, the wires throughout the house are the same gauge.

While residential electrical wiring does have some differentiation – the dryer example comes to mind – the bulk is made up by one black, one white, and one bare wire. All three work together to keep the lights on and protect the system if there is an issue along the line at any point.