How to Make a MacGyver Flashlight

Get your MacGyver on and make a flashlight from a few common objects. You will distinguish yourself as a person of both science and action. For those who need an introduction, MacGyver was the preternaturally calm secret agent played by Richard Dean Anderson in the title role of the 1980s television series. 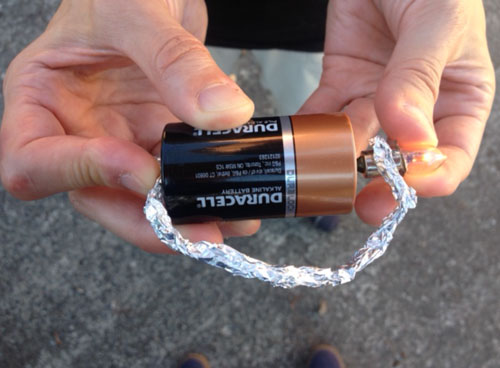 Each episode, MacGyver saved himself and his companions from a hopeless jam by taking whatever was at hand — a paperclip, cold capsule, meat hook, etc. — to fashion a means of escaping. Building and defusing bombs were his specialties.

One time, bad guys foolishly handcuffed MacGyver with plastic ties. He kicked lose a furnace face panel and melted the cuffs with an exposed wire. Exposed wires are dangerous and should be left to secret agents or electricians, who also are also persons of science and action.

Fortunately, making a flashlight from a few common objects is safe and easy.

How to Make a Macgyver Flashlight 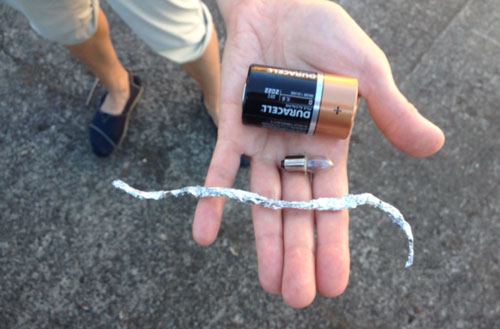 1.  With the scissors, strip the insulation off the end of both wires. Expose about half an inch.

3. Take the end of the loose wire and tape it to the battery’s positive ( + ) end. The bulb should light up. You’ve created a circuit!

For a handier version, tape the AA batteries together so that the negative and positive ends are touching. The negative end that shows will be the bottom of the flashlight.

1. Tape the exposed ends of the two wires to the light bulb.

2. Tape one wire to the negative end at the bottom of the flashlight.

3. Tape the other wire to the positive end. The bulb should light.

4. To hold everything together, wrap the batteries in the sheet of paper and tuck in the bulb.

Now that you know the basics, you can use other cylinder-shaped objects to make the flashlight case. You can also experiment with using aluminum foil in place of the wires.

The important thing is you know that electricity stored in a battery can be tapped. The next time the lights go out, you can put scientific knowledge into action, like MacGyver! (Of course, it will be dark and hard to see, but you’ll figure it out, like MacGyver!)

Caution: Wire and foil attached to a battery will get hot, so be careful, unlike MacGyver.

For help getting out of an electrical jam, contact the calm professionals at Prairie Electric, (800) 573-2750.