It’s been a long journey, but Phase 1 of the Lincoln High School rebuild in Portland, Oregon, is complete!

Lincoln is being completely rebuilt thanks to a nearly $800 million bond measure passed by voters in 2017. Construction began in 2020, and the new school facility will open to students in 2023.

Bora Architects designed the rebuild, and Hoffman Construction is the project manager and general contractor. 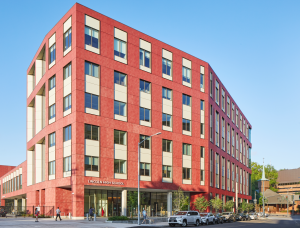 Prairie Electric is proud to have played a part in the construction of a new Lincoln High, one of the most historic high schools in the country. When the new building is complete, it will be just the second high-rise school west of the Mississippi River.

A Milestone for Lincoln High School and Prairie Electric

For nearly 40 years, Prairie Electric has been helping power up the Portland OR and Vancouver WA metropolitan areas. As experienced and expert electrical contractors, we’ve worked on residential, commercial, and government projects — but few have been as rewarding as this one.

That’s due in part to the unique nature of the school itself and this particular six-story project.

The Journey to this Milestone

This project has actually been in the works for more than three years, with preconstruction beginning five months before that.

That might seem like a long time, but when you consider that we’re building on top of the city of Portland’s Tanner Creek, which is roughly 40 feet below the current ground level, it’s no wonder it’s taking some time.

When the job is finished, we’ll have installed a mile of pipe just on the stage itself.

In total, we used around 20 miles of pipe in the building, including pulling about 200 miles of wire to complete Phase 1 — and we’re not done yet! Phase 2 will be underway soon. We’re excited for the community to see the finished product.

What This Means for Prairie Electric and Our Customers

The Lincoln High School construction project is a major milestone for Prairie Electric, and we’re so grateful to Portland Public Schools for entrusting us with this important task.

We hope that this blog post gives you a better understanding of some of the work that went into making Phase 1 a reality — and there’s still more to come!

As always, thank you for your continued support.

Prairie Electric Project at Lincoln High School in Portland OR

Lincoln High School is nestled in the heart of the Goose Hollow neighborhood, not far from downtown Portland. The school has a long and storied history. Founded in 1869, Lincoln is one of the oldest public high schools west of the Mississippi River.

The school has seen its share of famous faces who have made their marks in track and field, professional sports, and the performing arts. From politicians and athletes to musicians and artists, some of the more illustrious Lincoln Cardinals of the past include:

Lincoln has become one of the most popular schools in the city, thanks to its rigorous academic program and award-winning extracurriculars.

Here’s a brief look at the history of this beloved institution.

A Brief History of Lincoln High School in Portland, Oregon

The Early Years: Founded in 1869 when Portland was a small city with a population of fewer than 10,000 people. The first graduating class consisted of five students.

The school would move several times — and change names from Portland High School to Lincoln High School — over the course of the next few decades.

Establishing Excellence: As Portland grew, so, too, did Lincoln’s enrollment and its reputation as a powerhouse for academics and athletics.

Depression and War: The Great Depression hit Lincoln hard in the 1930s, as it did many communities. Despite these difficulties, Lincoln students excelled. The following decade saw more hardship, as many Lincoln graduates went off to fight in World War II.

A New Era: After the war ended, Lincoln began to rebound. The administration established new programs and enrollment increased rapidly.

In recent years, Lincoln has been recognized as one of Oregon’s top high schools by various news outlets, including U.S News & World Report.

Lincoln High School looks poised to continue its tradition of excellence for many years to come. And this rebuild is in many ways the first step toward a more modern learning environment and a new bright future for the Cardinals.