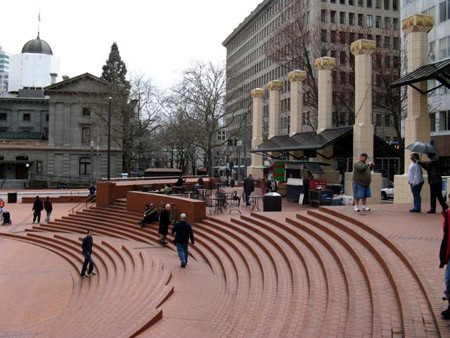 The lights are out, but everyone’s still home in downtown Portland.

A power outage occurred on Sunday that put Portland’s City Hall, Portland Building, and Multnomah County Courthouse, as well as much of the Pioneer Place shopping district, out of commission.

Court employees stood outside this morning to inform both employees and those scheduled for court appearances to come back Tuesday with hopes that the power will be back on. All court cases will be rescheduled due to the lack of lights, heating, and computers.

Individuals looking to pay traffic tickets or resolve family court cases are out of luck, a shock that many found frustrating, according to reports in The Oregonian. In addition to government buildings, the outage has taken down bank towers as well as many of the upscale stores near Pioneer Place and residential buildings nearby, a crushing setback for both business owners depending on holiday revenue and residents enduring one of the coldest winters Portland has experienced in decades.

Portland General Electric (PGE) crews are working non-stop to restore power but believe it will remain down for at least the rest of Monday. Work teams are coordinating with building managers to stagger the times at which each building goes back online to avoid a system overload. Those who work in the area are encouraged to check in with their employers about when offices and storefronts will re-open.

Sunday’s explosion and subsequent fire occurred within a cable in a PGE underground vault and was powerful enough to displace a manhole cover located at Southwest 5th Avenue and Taylor Street.

The blast damaged three other cables connected to the downtown power core, knocking out Portland City Hall, Pioneer Square’s shopping center, and several office towers, as well as the surrounding 11-block area from West Burnside to Southwest Morrison and from Southwest Broadway to 5th. PGE crews restored electricity to this area by Sunday evening, but the neighborhood reaching up to Southwest Jefferson Street is still without power.

The cause of the explosion is not yet known. According to Bill Nicholson, PGE’s Senior Vice President of Customer Service, the cables inside the vault were inspected once this year, and there is no sign of sabotage. His team is working around the clock to restore power and get Downtown Portland up, warm, and bustling again.