Should I Replace My Federal Pacific Panel?

Should I Replace My Electrical Panels?

Federal Pacific panels were once very popular electrical panels. (Note: These panels are also known as the circuit breaker, breaker box, breaker panel, and service panel.) They were commonly installed in homes throughout the Pacific Northwest from the 1950s through the 1980s.

In recent years they have been found to overheat easily and even cause electrical fires.

Does your home still rely on a Federal Pacific panel? It’s highly recommended that you replace it with an updated and safer electrical panel.

Another problematic type of electrical panel found in countless homes are Zinsco panels.

Used in the 1970s throughout North America, they were a fairly popular electrical panel choice. However, they’ve since been found to cause electrical issues in homes 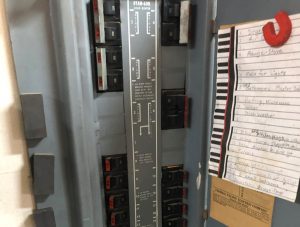 . If you live in an older home, you may want to double check your panel.

Due to the increased electrical load on modern homes and devices, Zinsco panels are likely to suffer overload and subsequent melting.

If your home relies on a Federal Pacific or Zinsco panel, it’s time to replace them.

The good news: A panel upgrade and/or panel replacement doesn’t have to be difficult. Contact Prairie Electric with any questions or concerns you may have about the electrical panel in your home or office.

One of the things that allows electrical panels to act as safeguards for electrical surges: the ability to trip a breaker. This stops a dangerous current from reaching the wiring of the home.

A Federal Pacific panel can operate normally for many years before dangerous electrical issues arise. Electrical fires caused by these panels are most commonly ignited by a power surge. They can also occur due to a short circuit that the electrical panel failed to trip.

In the case of the Zinsco panels, melted switches cannot be tripped due to a surge. This results in the dangerous electrical current going through the wiring of the home. This in turn can lead to melted wires — in a best-case scenario. The worst-case scenario? A house fire.

Is My Electrical Panel Safe?

To find out if your home has a Zinsco or Federal Pacific panel, first check the outside of the panel itself. There should be a label indicating which company made it.

In many cases, Sylvania or GTE Sylvania panels are the same make as Zinsco panels but were simply rebranded.

If your panel has the Zinsco or FPE label (for the company’s full name: Federal Pacific Electric), it is important to get it safely replaced. This should be done by a licensed and experienced electrician. And it should be done as soon as possible to ensure the safety of your home.

If your panel has the Sylvania or GTE Sylvania logo, it may still be safe for use. However, they should be inspected by an electrical professional to make sure the electrical panel is up to code.

Signs You Need To Replace An Electrical Panel

Signs that your home electrical panel is out of date or in danger of overload:

If your home has flickering lights or burnt-out bulbs, this may also be a bad sign. It could mean the surge protector is not working. It could be time to replace it.

Thinking about replacing your Federal Pacific or Zinsco electrical panel? Have other questions regarding the electrical security of your home? Or questions about your home’s electrical system in general? Then contact Prairie Electric to talk with one of our qualified electricians.

It’s also a good idea to set up a home inspection. We are committed to making sure your electrical panels are safe. Don’t short out your wallet with costly damages!

Hiring an electrician doesn’t have to be a burden. With a large and experienced crew of licensed electricians, Prairie has people power. We can diagnose and solve any electrical problems you may have.

When it comes to electrical work and electrical repairs, we are the biggest and the best. Call us whenever you’re in need of any kind of electrical service.