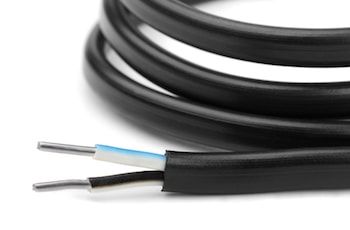 Homeowners and property owners often ask us if aluminum wiring is safe. (Spoiler alert: Yes, it’s totally safe.) They also ask us how likely it is that their properties are wired with aluminum. Finally, they want to know whether or not it should be replaced.

We want to assure our customers and the readers of our blog that aluminum wiring is safe. There’s probably no need to replace it. However, there are some special considerations that you should know when it comes to aluminum wiring.

Let’s take a deep dive into the wonderful world of wiring.

A Short History of Aluminum Wiring

Aluminum wiring is permitted when it has been installed correctly by a licensed electrician. (If the installation followed the correct procedures and the right materials were used.)

Aluminum wiring has been around for as long as electricity has been powering homes (late 1800s).

Many homes built during the 1960s and 1970s, especially, have aluminum wiring. That’s because copper prices skyrocketed during that time. This forced builders to search for more cost-effective solutions. In this case, it was that old standby: aluminum.

Aluminum building wiring is designed for use in structures that use aluminum electrical conductors. Aluminum actually provides a better conductivity-to-weight ratio than copper. According to some reports, one pound of aluminum can equal the carrying capacity of two pounds of copper.

Aluminum wiring has gotten a bad rap over the years. This is mostly due to the fact that some electrical devices in older homes were not designed to handle aluminum wiring. This occasionally led to electrical fires. However, updated and revised standards for both aluminum wire and the devices themselves have reduced and often eliminated problems.

With the growth in application of aluminum conductors came the manufacture of aluminum building wire in the 1960s,” they write. “Due to their low cost and availability, utility grade AA-1350 aluminum building wire became extremely popular and was installed in many buildings. Field complaints involving termination failures began to appear in the late 1960s. In answer to the problems being experienced in the field, wire and cable producers along with other members of the industry such as testing laboratories and connector manufacturers, began to address the problem with a reevaluation program developed in 1970.

Qualification tests for aluminum building wire were developed by testing laboratories and connector manufacturers developed new connectors for use with aluminum wiring. In qualifying wire for aluminum building wire applications, wire and cable manufacturers began to produce and list the 8000 series conductors. By mid-1972, only these re-qualified aluminum conductors and wiring devices (designated CO/ALR) were acceptable by industry standards.”

Let’s expand on that statement from NEMA.

Copper is a better conductor of electricity. When manufacturers began working with aluminum wiring, they adjusted it. They used larger wires so it worked just as efficiently as copper.

Aluminum is also much softer than copper. This caused a bit of difficulty for electricians who were used to working with stronger copper metal wire. It’s easier to damage aluminum wires, which can cause overheating.

Everything moves with heat, and aluminum isn’t any different. Aluminum wire will expand more than copper when it gets hot. When it is repeatedly being expanded and contracted, it can cause the wire to lose connection under the screws and overheat.

In addition, aluminum wire can rust and corrode. When it does that, it does not conduct electricity as efficiently as it could. This interferes with the flow and can cause flickering lights.

All of these issues required a solution. After some research, the problem was discovered at the connections. Switches, light fixtures, at the panel, or at the connecting point of appliances — that’s where the issues arose.

The solution was to provide special connectors that were approved to help eliminate any overheating or electrical flow issues.

What Should You Do If You Have Aluminum Wiring?

Think you might have faulty aluminum wiring? Have you noticed that your switches and outlets feel hot? If so, you should have an electrician come out and test the system right away.

Don’t worry! You may not need to replace the wiring completely. However, it may require some maintenance or repair from an electrician familiar with this type of wiring.

Aluminum wires in good working order still meet industry standards. Still, in order to prevent any loose connections, you should have it looked at in detail.

Vancouver Electricians You Can Trust