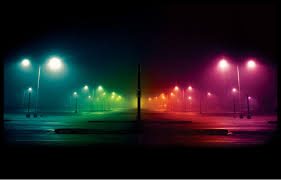 Calling all city workers: which one of you wouldn’t want to be able to check for outed street lighting from the comfort of your desk?

Enter the lighting system Tvilight, invented by Dutch designer Chintan Shah, who, on a flight over Europe one day, noticed that desolate streets were lit at night when no one was there   to require illumination. As he began to ask questions about the cost of needlessly burning bulbs, he discovered that a great deal of money could be saved with a lighting system that only turns on when needed.

Can you imagine a streetlamp that anticipates your arrival and turns on as you walk by? This lamp could change color, announce that its bulb was getting low, and save communities billions of dollars in lighting costs. Tvilight does just that.

However, the movement to make streetlights more sustainable goes far beyond just saving money. Shah’s mentor, Dutch artist Daan Roosegaarde, suggests a more artistic and “human” approach: “[The system is] not just a machine with a feedback loop, but something that has its own intelligence and is willing to negotiate, to hack you in the same way you hack it.”

This intelligent system might coordinate between lighting fixtures and emergency vehicles, turning bulbs red when a fire truck rides by so that other drivers and pedestrians know to move out of the way as the emergency vehicle approaches. By making lighting responsive to surrounding stimuli, it can better serve a community while requiring less power.

Shaw predicts that his new system will cut energy costs and CO2 emissions by 80%, reducing maintenance by another 50%. System operators would make changes to lighting fixtures remotely, and would know ahead of time if a bulb were going to burn out, preventing disruptions in service.

Municipalities in Holland and Ireland have already implemented Tvilight, and requests from India, Turkey, Israel, and the United States, among others, are pending.

Our technicians at Prairie Electric are highly skilled in cutting edge electrical developments of all kinds. We recently installed an LED street-lighting project in Richland, Washington using ROAM, a network of intelligent photocontrols. These control nodes are used to execute commands based on scheduling or daylight level inputs and can also fixture performance and operating conditions in 70-1000W 120- 480VAC LED, HID and other fixtures. Fixture performance information is transmitted wirelessly to a gateway and passed on to a server, where it displays graphically at a workstation for customers to view.

Looking for the latest in street or traffic lighting technology? Look no further than Prairie Electric. We use only the latest, state-of-the-art technologies to provide you with the service you deserve.